When we arrived in Budapest, I was not impressed at all by the cityscape. The arrival terminal was a bit old, even though the taxi driver who was in charge of picking us up at the airport was super friendly, and was very eager to show us a glimpse of Budapest, he could not convince me that Budapest is a pretty city. I was hoping that the ‘old and tired’ image of the city was only at the parking lot of the airport and the road from the airport toward the city.

As we drove along toward the city center, the buildings get denser. Our taxi driver kept on explaining about various building along the street. as he tried to help us understand a bit of the city as well as giving us some tips of surviving in Hungary. And to make the conversation more interesting, he also told us a bit of himself; really very nice man.

As my husband was listening to our driver politely, I tried to memorize quietly every little thing that our taxi driver explained to us along the way, in case we needed to comeback to see something interesting outside our holiday package.

Learning about the history of Budapest, which was arose out of two Bulgarian military frontier fortresses Buda and Pest: situated on the two banks of Danube. Buda and Pest started their development in the 12th century, however, both towns were devastated during the Mongol invasion of Europe in 1241-42; hmm… no wonder the city looks old, it’s been thru a long history. But hey, so have other European cities.

Carrying on with the history: Buda and Pest remain two totally different cities and reached their heyday in the 14th century, when the Angevin kings from France established Buda as the royal seat of centralized power. However, it was Pest becoming the cultural and economic centre of the country. The first National Theatre is built, along with the Hungarian National Museum, all that was in the 19th century.

Through out all Budapest and Hungarian history since the first settlement of the Hungarian tribe in 10th century until the 20th century, the Hungarians lost most of their wars. From the Tatar(Mongolian) invasion that destroyed both town in the 11th century and then later the Turks’ Ottomans, to the post WW II era. And believe it or not those scares from the wars especially WWII, are reflected in the city architecture.

The building at Buda side that show  gun shots of WWII on it’s preserved facade today.

Unlike Paris who try to isolate modern expression of architecture in one of it’s suburb, Budapest shows all periods of Architecture era all over the city, and maybe this is why I was not able to see Budapest as representative of a certain era. Looking back at it’s history and seeing how it looks now, maybe I needed to see the city from a different angle. Budapest represents a blend of Old and New Architecture, it has Roman’s Amphitheaters, Gothic Style cathedral, as well as Traditional Turkish Bath as the heritage  of the Ottoman occupation. The history of the city represented in the facade of the city’s architecture. Maybe that’s it, Budapest cityscape is Eclectic style; we just have to wait for the modern and high rise buildings being built, to complete the city as an architectural haven.

In memory of the Hungarian uprising of 1959, bullet decorations stuck on one of the buildings around the ‘town square’

Our visit to Budapest was to co-inside with the celebration of the Hungarian National Day, a commemoration of the start of Hungarian Revolution on 23 October 1956, the people’s power against the  government of the People’s Republic of Hungary and its Soviet-imposed policy. Despite the failure of the uprising, this actually played   a role in the downfall of the Soviet Union decades later (more info in Wikipedia).

Imre Nagy, statue at Martyrs’ square, across the Parliament House

Statue of Imre Nagy, the Prime Minister who turned hero of the uprising, was immortalized with this statue and remembered each year together with a unique Hungarian flag they fly every year during this period, including on the one they show on the Parliament House:

Looks like a symbol in in the middle of the flag, but…

OK, the facade my look eclectic, and some area are neglected, but Budapest tries hard, and it shows on so many buildings are under refurbishment period. And in terms of Interior Design, I think it retains it’s reputation as Central Europe’s capital of design. There are many nice and modern designs of galleries, cafes  and restaurants with interesting modern touches: 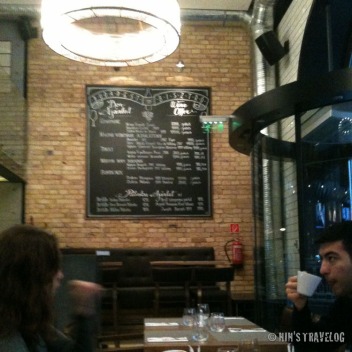 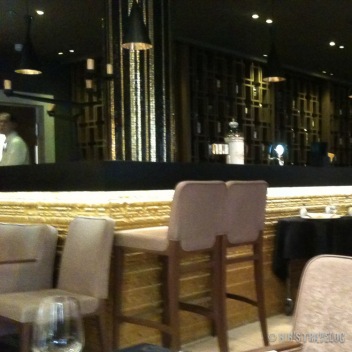