One of the worries of international travel is getting a visa to enter a country. For those holding a western passport, most of the time they have no problem on entering foreign countries as they normally western countries have an agreement that so and so country has no visa requirement. However, to enter a developing country is another story.

I am an Indonesian passport holder and whenever I go to Europe or to the US or any developed country in the World I need to organize an entry visa beforehand. On the other hand, my husband who is a British passport holder has no problem entering most countries in the world.  The worst situation for him is to buy a visa on arrival, and that’s what he does whenever he visits Indonesia. However, when we decided to visit Tanzania, it worried him, as he had not visited that country before and he had me in tow which meant we both could have problems entering the country….

Our travel agent had suggested to organized a visa prior visiting Tanzania, and learning from our experience in visiting other countries such as Indonesia, when everybody is standing in long queues waiting for a visa,  it could be a big problem as he has previously had bad experiences regarding visa rejection. The question was how to apply for an entry visa for Tanzania from Qatar, as there are not many African countries with a representative in Qatar?   Thus visa on arrival was  the only option… but wait, we are not arriving in it’s capital Dar es Salaam, we are flying in to Kilimanjaro Airport, the International Airport closest to the famous destination of Serengeti plain, so maybe even more of a problem. 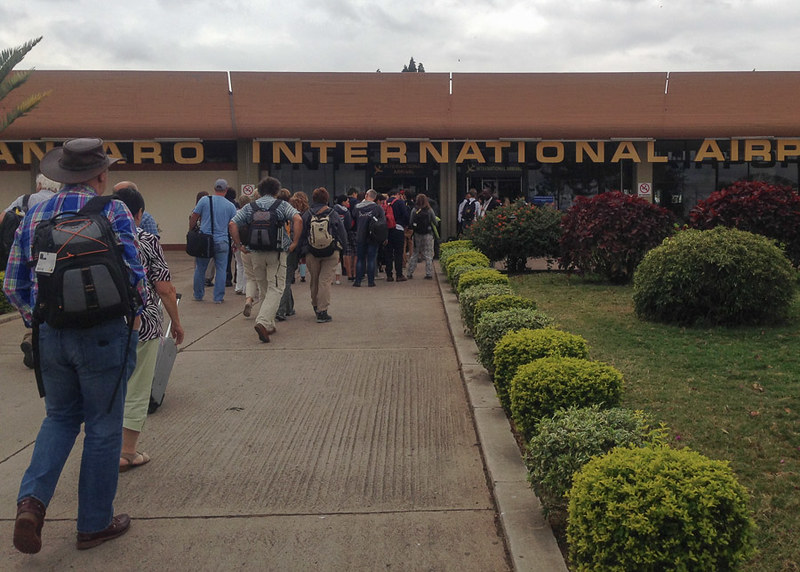 After the airplane landed, we had to walk to the arrival terminal of Kilimanjaro International Airport

Fingers crossed, we landed at Kilimanjaro airport and… it turned out that everybody needed a visa on arrival…

I need a visa!

Although Kilimanjaro International Airport is relatively small, applying for an Entry Visa on arrival was relatively easy, from finding the right paper work, the signs of which counter we should go to, paying for the visa as well as a handy “Mr. Fix it”  to bypass the crowd for us to get a faster service… and there you are, in 30 minutes after we landed we were outside in the airport car park.

The baggage carousel where we collected our belongings after obtaining the visa.