Bahrain as a country is always special to me. I guess it was 7 years ago I first visited Bahrain and it was only a visit. I didn’t know then that a year later my husband (then he was my partner) and I moved to Bahrain. We stayed for a year.

Traveling to Bahrain in 2008

About 6 years ago, we were deployed to Bahrain from Qatar to look after several projects for the company we worked for. We left Qatar in style with thoughts that we would never go back to Qatar.  Keith sold his car, we canceled our residency permits, credit cards, bank accounts  and other small personal effects, hoping to start new for everything.  But our life in Bahrain was short lived because of the global recession in 2008-2009 forced us to go back to Qatar. As most of us do, we follow the jobs, although it was a global recession, Qatar was too rich to be affected. Well I guess we were lucky that the company we work for still required our services in Qatar. Our story of living in Bahrain can be seen here.

The difference between our move to Bahrain compared to our move back to Qatar was that the company decided to retain our official Bahrain residency.  We were registered not only as Bahrain residents but also as the Company In House Bahrain Resident Engineers, or something like that. We don’t really need to do a ‘job’ in Bahrain or to be in Bahrain all the time, as our main jobs are still in Qatar. However, we did need to pack up everything in Bahrain when we moved back to Qatar and again cancelled our bank accounts and credit cards. We don’t keep a place to live in Bahrain and because our stay was only a year we had to sell our new Bahrain car and buy another one back in Qatar!   Thus Keith drove our car back to Qatar himself across the Causeway to Arabia. (see Crossing)

… we are back again for our annual trip to Bahrain…

To maintain our residency in Bahrain as local staff, we need to visit Bahrain from time to time. We are lucky that our company normally fly us in for a couple of days free holiday to renew our Residence Permits as well as our Engineering License. As we already know Bahrain, we normally just stay in the hotel, sometimes doing some shopping etc, before we return to Doha. Honestly it’s an annual holiday treat from our company and we are not complaining.

This year, five years on since we left Bahrain, we are back again for our annual trip and instead of staying and enjoying the hotel, we do a bit of exploration, visiting our old projects as well as visiting some of our old haunts. Sanabis was the area where we lived; as well as it was a new area with a lot of new nice apartments and shopping malls that was handy for our daily supply and life. It was also quite centrally located to our projects. However, Sanabis is also known for it’s notorious rebels either for those who fight against the current government or the Shia and Sunni confrontations. I guess this is why, the all suites hotel we stayed in the first time we arrived in Bahrain is not there anymore, as they have closed it down.

Sanabis is also close to the infamous Pearl Round-About, a place popular for demonstrations during the Arab Spring. The Pearl landmark was soon demolished by the authorities, just to get rid of the open space where demonstrations took place and now it’s a dis-functional traffic light. It is now impossible to get close to this roundabout as all access to this junction is now blocked and guarded by the police. Obviously taking pictures of this area is now a big no-no.

Unfinished prestigious Villamar Project on the waterfront of Manama – now becoming the face of Manama City?

Near our apartment there were two shopping malls that we visited regularly just to get our daily provisions and sometimes to keep in touch with the outside world, such as a visit to the  cinema. Bahrain Mall looks just the same and they’ve just refurbished the food court.  However, Dana Mall, the place where we went to watch movies, looks derelict with very limited activity.

We also visited our old construction projects, the unfinished projects we left in 2009, and they still look the same as we left, skeleton of structures complete with porta-cabin site huts, totally untouched.

Project condition a month before I left: structure of the building is half finish

The project now: road work finished off, but the buildings are just the same

Harbour for the traditional fisherman near Mina Manama 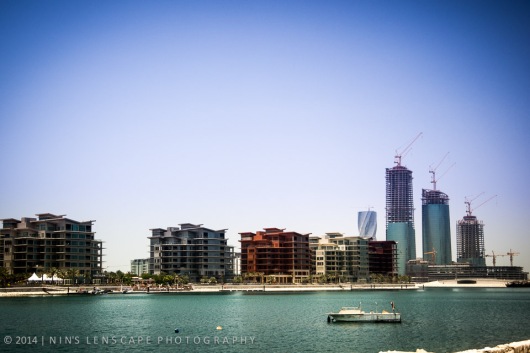 No more traditional fishermen’s harbour near Mina Manama, instead a clear view toward a finished Reef Island development

Another place we visited was Adliya, a nice little suburb where you can eat and stroll around to find little galleries or local antique store or even enjoy street food like the locals. This was our favourite place to go for a blow-out at the end of the week. Too bad that when we revisited this place, not only did we get lost and could not find our way around, but also the place was run-down and not that interesting anymore. The restaurant that we visited to was not very special or maybe we came at the wrong time of the year. 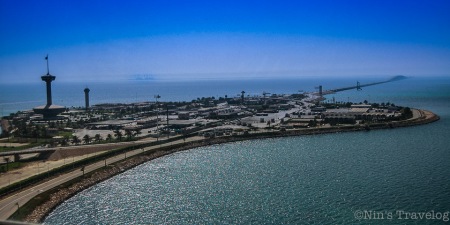 Bahrain-Saudi Causeway; the other end is the Kingdom of Saudi Arabia.

Although Bahrain is an island nation, which makes it a bit isolated from neighbouring countries due to no direct border, it has the only overland border (causeway) with Saudi Arabia, where every week hundreds of Saudis (either local Saudi or expats working in Saudi) come across to Bahrain, just for an R & R or a long relaxing weekend where they can watch the latest block buster movies. The Saudi Causeway was the only access from and into Bahrain with the rest of the gulf and Arabia. Built in the 1970’s it was a marvel engineering for it’s time and an interesting place to go to, (no need to go all the way to Saudi), just to go up the tower to see the other side of the water.

On this visit we couldn’t go up the tower, as it was under renovation, so all we could do was to do a U Turn and return back to Manama….

it’s not fair if I said that Bahrian is going down, yes, maybe it’s slowed down on its development, but that doesn’t mean that Bahrain has no activity anymore. As a matter of fact, they managed to finished off, or rather presented Reef Island that was built almost ready before the recession and for years I thought it was another unfinished project. It has become the “New In Place” to go to, instead of Adliya. Yes, Keith’s Villamar project was never finish, in fact it’s become an ugly face of Manama’s skyline. However, there are other interesting buildings being constructed and finished now nearby on Bahrain Bay area.

Bahrain’s developments may not be as fast as other countries in the gulf, and their tourist industry is not as booming as the other countries, but it still has its own attractions.

Bahrain also finished their national infrastructure projects, building bridges and highways that connect the mainland Bahrain to Muharraq as well as looping around Bahrain Bay.

All in all, Bahrain’s developments may not be as fast as other countries in the gulf, and their tourist industry is not as booming as the other countries, but it still has its own attractions. It still has a lot of expats and visitors from Saudi as well as Kuwait and the Emirates who like to come across the Causeway for their (dirty or not so dirty) weekends. We may not be as romantic as some expats (quite a lot in Bahrain) who end up in Bahrain in their old age, but Bahrain is still a pleasant place to visit …. especially as it’s a free holiday for us at our company expense. 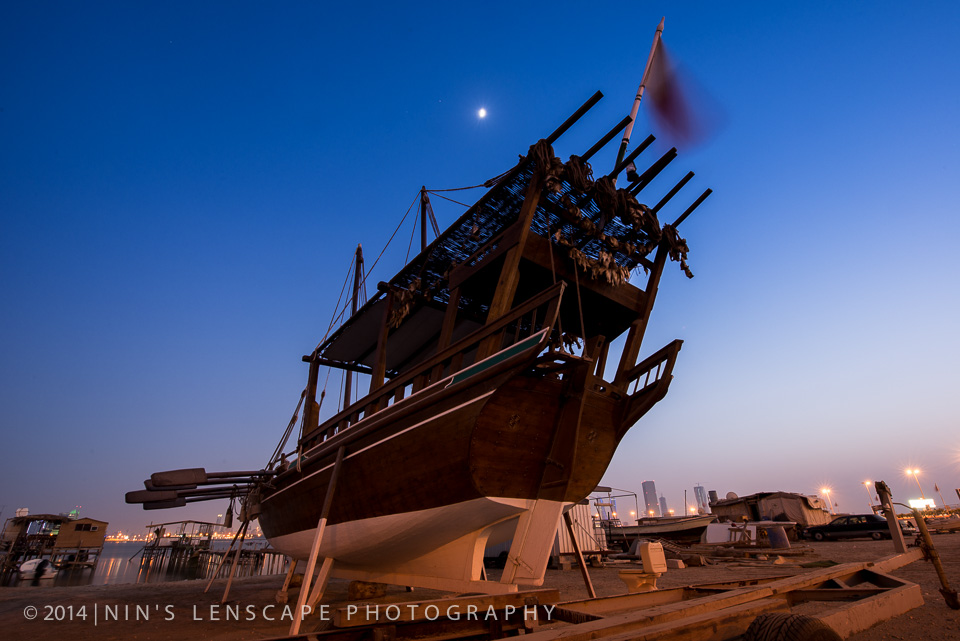