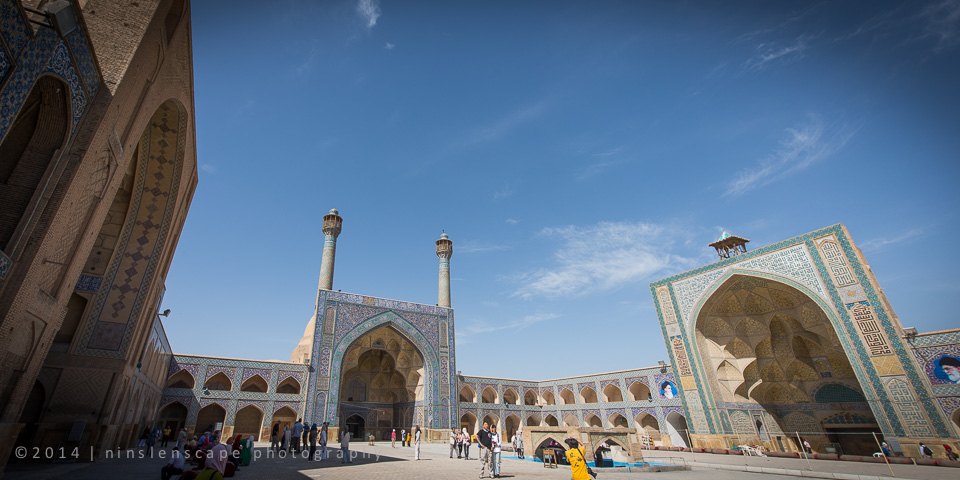 I promised you all a few months ago to tell the story behind the “Monochrome Mosque” of Iran. Traditionally Iranian Mosques are very rich with ornaments, be it glass/mirror ornaments or colourfull mosaic ornaments (this is why I need pictures to support this statement). However, in Isfahan, one of the biggest and oldest mosques is not like that at all.

Masjed-e Jāme’ in Isfahan was first built in 771 AD a decade after Islam was introduce to Iran. This mosque was recognized as the first mosque built in Iran that had a Dome style. Today the building is still standing, even though suffering from severe earthquakes and has undergone several expansions as well as facelifts. It’s a witness to the architectural evolution of Iranian architecture over 13 centuries. It was the Seljuq (the empire dynasty that ruled Iran during that period) expansion and the characteristic introduction of four different iwans¹ (Chahar Ayvān) around the courtyard as well as two extraordinary brick domed chambers. This kind of architecture style later on became the prototype of a distinctive Islamic architectural style of designing mosques throughout the Middle East as well as the evolution of Mosque architecture between 771 AD to late 20th century. 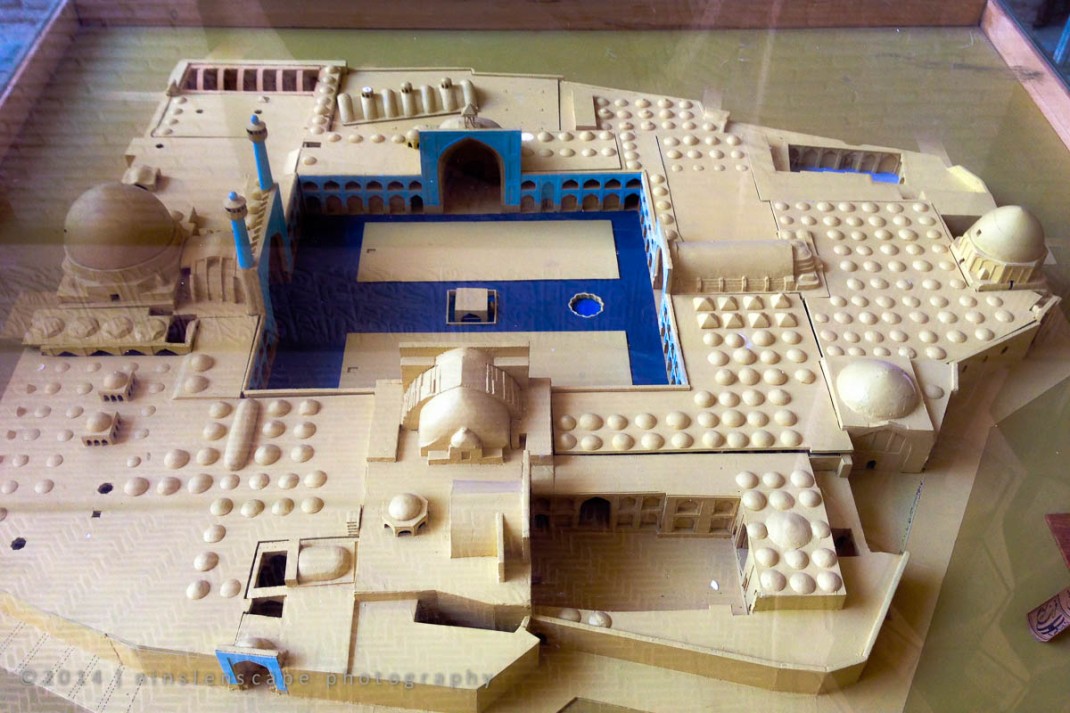 Model of the mosque can be seen at the entrance

Shown above is the model which was located inside the building after UNESCO stepped in to help the Iranians maintain this building as part of it’s World Heritage Convention list.   The model shows that the lower, southern side of the model (pictured above at the left hand corner of the square) is the oldest along with the prayer chamber to the north.

While the Imam Shah Mosque is located on the other side of town, there is connection to go the this Masjed-e Jāme’ of Isfahan through the souk/bazaar that with each other as well as through the Imam Khomeini Square.

The Transformation over 12 CenturyS development of the mosque:

The initial construction of the Isfahan metropolis was conceived at about the same time as the Masjed-e Jāme’ of Isfahan was founded at its present site in the year 156 AH or similar to 772 AD After Christ, or one and a half century after the birth of Islam. The size of the mosque corresponds to the town of Isfahan’s population; built at the end of the central square of the neighbourhood.

The picture above shows the original foot print against the current foot print, which later on, due to the city’s expansion the mosque also got continuous expansion throughout the 12 centuries since. 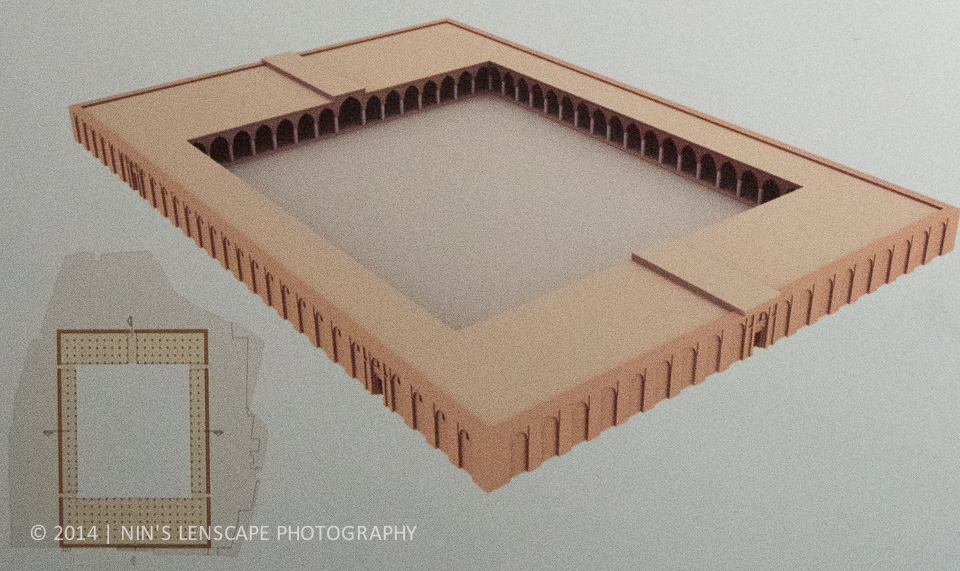 The first expansion was in the 9th century AD, due to the prospering city of Isfahan and its increasing population. It was during the Caliphate of Al Motazam e Abbasi in 840 AD that this Friday Mosque of Isfahan (Masjed-e Jāme’ of Isfahan) underwent substantial changes. They totally demolished the old mosque and built it again on the same location but rotated the mosque so that it’s properly facing Kiblah in Mekkah (the holy city in Saudi) – rotation of the development shown on the Image 1 of the mosque’s transformation.

The plan and layout of the mosque were also changed; it introduced a big “central sahn²)” 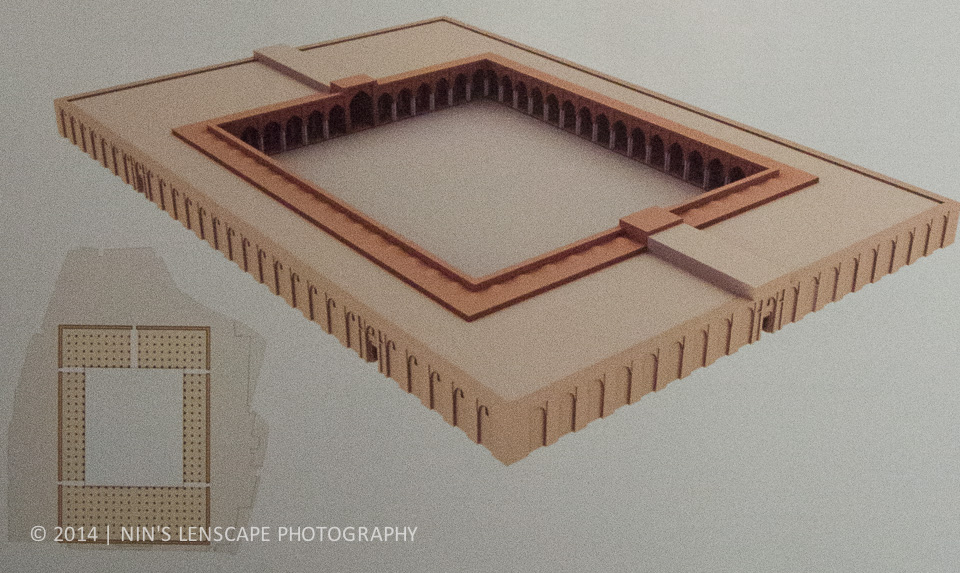 cooked brick on the columns and walls of the mosque.

The expansion and transformation of Masjed-e Jāme’ of Isfahan is always related to the history of Iran and its rulers. Thus in the 10th century AD, it was the  Al e Buyed dynasty – the ruler of that period –  decided to make the mosque bigger as the picture above, by adding more layers on the sahn (inner courtyard) of the mosque as well as on the outer side of the mosque. A new technology also introduced: cooked brick work, which resulting in geometrical patterns of the interior facade of the mosque, as well as portions of the walls.

11th and 12th century AD was the period of the Seldjuq power, and again Masjed-e Jāme’ of Isfahan witnessed a massive change both interior and exterior. The change also marked a significant development of Islamic Architecture style in Iran. It’s from Shabistani columned spaces to a four iwan¹) style as well as the introduction of domes – seen on the sketch above, two domes were introduced located on the north and the south of the mosque.

1. Nizam al Mulk dome was built as a free standing and single structure in the sought wing of Masjed-e Jāme’ e Isfahan after the partial demolition of shabistan (about 1080 AD) so that the roofed spaces of the either side of the mosque structure became detached from it and the exterior space of the dome remained completely open.

2. Taj al Mulk dome was built at exactly the opposite side of Nizam al Mulk, and was part of the extensive governmental buildings that were connected to it.

3. and 4. North Iwan was built facing the inner courtyard and through to Taj al Mulk; a corresponding iwan was also built later on face to face with North Iwan

5. and 6. is the building the East and West iwan, at the middle of the long corridor

7. Another annex was built on this corner.

In the 14th century was the Ilkhanid era (ruler from Mogul during the Mogul invasion to Central Asia an Middle East), where they built the famous Uljaitu Mihrab (where the Imam, leader on a prayer time leads his congregation to pray). This is the praying room for the sultan  Muhammad Khodabandeh Uljeitu  (r. 1304-17). This mihrab is the most elaborate and heavily decorated with calligraphy or Koranic verse on stucco. I have never seen such a massively decorated mihrab with calligaraphy, as mostly they are a geometric decoration.

The Al e Mozaffar dynasty was next to come to power in Iran, where they create an open air praying area called Mozalla, which was not a success. But they also introduced a Madrassa, a religious school annexed to the west side of the mosque.

Masjed-e Jāme’ of Isfahan carried on to expand during the Timurid era in Iran, they expanded the worshiping area as well as the decoration of the mosque facade including the facade of the four iwans around the inner courtyard, and adding two tiered pairs of columns on the south iwan. This facade then become a typical mosque architectural style in Iran.

The Safavid decided to cover up the open air praying area due so that it prevent the exchange heat between inside and outside spaces during different season.

During the Qajar ruling, there are not many changes on the development of this Masjed-e Jāme’ of Isfahan; except the inner courtyard where they introduce brick platform and as the consequences, courtyard level were raised about half a meter from the interior floor level.

Today, the size of this mosque is still in use as Friday Praying (similar to Sunday Congregation in Christianity) by the males of Isfahan residence; and mainly they are praying at the inner courtyard.

¹) – Wikipedia explain Iwan is a rectangular hall or space, usually vaulted, walled on three sides, with one end entirely open; however, Merriam-Webster dictionary, iwan– noun – \ˈēˌwän\ says:  a large hall or audience chamber often open on one side and found in Parthian architectur. This is an exclusively Iranian Mosque Architecture style.

²) – Wikipedia explain sahn is a courtyard in Islamic architecture. Most traditional mosques have a large central sahn, which is surrounded by arcade on all sides.

²) – Wikipedia explain a shabistan is an underground space that can be usually found in traditional architecture of mosques, houses, and schools in ancient Persia