For most of the last 10 years I have lived in Qatar, I never had a relative visiting me in the Middle East, until last month when I invited my brother for a weeks visit to Doha. Honestly, as Qatar is such a small country I didn’t know how he would spend his week in Doha, let alone Qatar.

All my time in Qatar, I visited this place 3 times

Qatar is a small country with small population as well as having a limited history, thus it has limited places to see, either historical places or places of interest. However, I think I will use this opportunity to revisit places in Qatar that I’ve previously been to and let my brother see what my life is as an expat in Qatar. One of the places that I took him to visit is Fort Zubarah.

Lonely Fort Zubarah in 2005, in the middle of Qatar desert, North West of the Qatar peninsula

The first time was when I tripped “around Qatar in a day,” during the first 6 months after I arrived in Qatar, back in January 2006. It was only 3 of us girls, and I think I barely knew my way around Doha (the truth is even up to now I always get lost in Doha anyway, as everything seems to looks the same). Fort Zubarah, then was a fort in the middle of nowhere, there was barely anything around it with no development. I wondered to myself, why would anyone build a fort in the middle of nowhere, and how old is this fort actually and is it Arab architecture (or rather Qatar architecture) style really like this?

Fort Zubara, early in the morning, under the moon light

The second time I went to Zubarah Fort was in December 2009, three months after I came back to Qatar from my 2nd expat posting in Bahrain. I went there with a convoy of cars, with a couple of families who wanted to take pictures of this ‘historical place’ at sunrise.  Fort Zubarah still there, the place hasn’t changed (off course…), but not quite as abandoned or isolated as before. It has fence around it, and we could park in a small car park.

Sunrise from the other side of the Fort

We arrived there around 5 o’clock in the morning, after an hour and a half drive north from Doha. The sky was still dark blue and the sun was not yet up; the temperature was rather fresh for a place in the desert, and off course there was nobody there as it was in the middle of nowhere!   For us, there was no proper plan, so that we just waited until the sky got a bit lighter, or if we were lucky we could see sunrise, it would be nice if could take a long exposure at blue hour. What we forgot was that there is no sunrise on this side of the peninsula; we should have came here at sunset instead… yay! 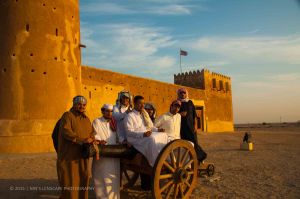 Young local guys posing for us.

As we did some exploration and went inside the fort, I found nothing there either. I have to agree that the building was still very much intact and did not look so old at all. A bunch of young Qataris came along a couple of hours later, in their fancy big SUV trying to announce their presence by shouting, laughing at each other and occasionally talking to us, which ended up with a photo session…. they were all keen to be photographed and hoping that someday, their faces would be famous online. Honestly that was one of my very few interactions with Qatari locals.

My thoughts about Fort Zubarah’s history did not stop there. The fort remains intact and clean considering the climate that it has to endure all this time.  I am not a historian nor an archeologist, so I have no clue about the history and back ground of this Old Heritage of Qatar… this could explain the history of the country itself… maybe.

Sometime last year I heard that this fort was added to list of the UNESCO’s Archeological World Heritage Sites???? check it out here. Actually when I visited the Fort for the last time (I hope) I did not know the whole story of the Fort, it’s only after I was there, the place had not changed much but it looks like a well run historical site, complete with a souvenir shop, little museum with photos and information about the habitat around it.

This is the interesting bit that I read from the information in side one of the rooms in the Fort, that it was only built as recently as 1930; only after WW I. Is this what made UNESCO’s Archeological World Heritage Site? as this place is less than 100 years old… no wonder it still looks in pristine condition. But wait, there is another interesting fact, close by the Fort UNESCO are carrying out an archeological dig, so there is something going on. Fort Zubarah maybe only have been built recently, but the village around it  – Zubarah Village, which has been abandoned, could be older than that. But how old though….?